A new study by The University of Western Australia aims to bridge the gap in understanding the effects of ocean acidification on coral reefs – one of the biggest worldwide threats to their future.

Coral reefs are diverse underwater ecosystems made of calcium carbonate structures secreted by corals and held together by coralline algae.

Rising CO2 levels have changed the temperature as well as the chemistry of the world’s oceans, which causes coral reefs to grow more slowly.

Research Fellow Dr Steeve Comeau, from UWA’s Oceans Institute and Australian Research Council Centre of Excellence in Coral Reef Studies, said his study highlighted the difficulties in analysing the effects of more acidic oceans on how the calcium carbonate foundations of corals were deposited or dissolved.

“There are concerns about the future of coral reefs in the face of ocean acidification and warming, and although studies of these phenomena have advanced quickly, efforts have focused on pieces of the puzzle rather than integrating them to evaluate ecosystem-level effects,” Dr. Comeau said.

“The field is now poised to begin this task, but there are information gaps that first must be overcome before progress can be made.”

Many of these gaps focus on calcification at the levels of cells, organisms, populations, communities, and ecosystem.

What makes Dr. Comeau’s task particularly difficult is the complexity of the interdependent processes by which coral reefs respond to ocean acidification, with effects scaling from cells to ecosystems and from microns to kilometers.

Existing ecological theories provide an important and largely untapped resource for overcoming these difficulties, and they offer great potential for integrating the effects of ocean acidification across scales on coral reefs.

A large number of empirical studies designed to document the effects of ocean acidification on organisms has accrued since the threat became apparent.

“Future progress will depend on the integration of these observed effects and the application of theory to these massive data sets,” Dr. Comeau said.

“Powerful and appropriate theory is already available for this task (mostly in terrestrial studies), and significant effort should be allocated to adapting and expanding this theory to coral reef applications.”

This research has been published in the BioScience Oxford Journal 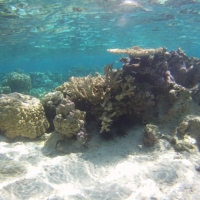