Ocean acidification could lead to smaller, more porous and malformed skeletons in young coral by 2100 according to a team of scientists from The University of Western Australia.

UWA PhD student and lead author of the paper, Taryn Foster, said new coral recruits are usually only around 1mm in diameter and so ‘are more vulnerable to stressors like predation, overgrowth and storm damage’.

“They need to be able to build robust skeletons and do this quickly, in order for them to move out of these small and vulnerable size classes however unfortunately, ocean acidification is making this task more difficult,” Ms Foster said.

The UWA research team mimicked the oceanic conditions predicted to occur under a ‘business-as-usual’ emissions scenario, elevating both the water temperature and CO2 levels.

They then used 3D X-ray microscopy and scanning electron microscopy at the Centre for Microscopy, Characterisation and Analysis at UWA to both visualise and quantify changes in the skeletal formation and found that coral recruits were unable to build normal skeletons under acidified conditions.

Team member Professor Malcolm McCulloch said the researchers not only recorded reduced overall skeletal deposition, but ‘also observed a number of deformities in the skeletons grown under high CO2.’

“These ranged from gaps, fractures and disrupted symmetry to large sections of missing skeleton and we also saw deep pitting and a corroded-looking skeletal surface in the high CO2 corals,” Professor McCulloch said.

“This study exposes for the first time, changes to the structure of the coral recruit skeleton under predicted ocean acidification.

“Using 3D X-ray microscopy has made it possible to measure internal structures, volume and look at each individual X-ray slice; things that are impossible to do using conventional 2D imaging methods.

“It also makes it much easier to communicate the changes that ocean acidification could cause in these tiny animals, which are essential for replenishing the reef and recovery after disturbances,” he said.

The project was funded by the ARC Centre of Excellence for Coral Reef Studies. 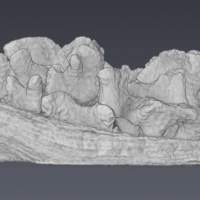