Scientists have just completed a successful two-week mission unlocking the secrets of Perth Canyon, a deep ocean gorge the size of the USA’s Grand Canyon. During this time, they discovered unusual deep-sea communities as well as an autonomous ocean glider that was lost for two years.

A group of scientists from The University of Western Australia’s Oceans Institute set off on March 1 aboard Schmidt Ocean Institute’s research vessel Falkor for an expedition to Perth Canyon, an area where few others had gone before.

The underwater canyon starts about 30 kilometres off the coast of Fremantle and extends out from the continental shelf edge of WA to depths of more than four kilometres to the abyssal sea floor. It probably formed more than a hundred million years ago when an ancient version of the Swan River cut the canyon during rifting that separated WA from India. The now submerged canyon is important as it acts as a conduit into the deep oceans with upwelling providing essential nutrients to make it a marine hotspot, attracting blue whales and other large fauna that migrate to the waters seasonally to feed.

Until this expedition, the canyon has been relatively unstudied. However, Falkor’s state-of-the-art mapping systems and a remotely operated vehicle (ROV) that could penetrate depths of more than 2000 metres allowed the research team to examine the canyon. Chief Expeditioner, Professor Malcolm McCulloch, said the team, which included researchers from the Western Australian Museum, CSIRO and the Institute of Marine Sciences in Italy, had travelled more than 1800 kilometers in order to map the 400 square kilometres of the canyon and had recorded its maximum depth at 4276 metres.

“We have discovered near pristine sheer drop cliffs of over 600 metres and mapped structures that are rarely found in other parts of the ocean,” said Professor McCulloch. “It is truly a huge canyon which has cliff faces and outcrops similar to the Grand Canyon but now submerged beneath the ocean and extending to depth of more than 4 kilometers. It is at a depth where light can’t penetrate, making a dark water column where there are no signs of light from above or below.”

It’s in these cryptic dark spaces where Professor McCulloch’s team discovered a surprising deep-sea community of corals and other organisms that survives in darkness and clings to the hard rock of the canyon’s walls at 1600 metres below the surface. Organisms such as venus flytrap anemones, brisingid seastars, golden coral, basket star and mushroom soft corals, have only been sporadically encountered before in this area although they have been found in other parts of the world’s deep oceans.

The team will now analyse these deep-sea corals to find out their age, how fast they grow and whether the conditions in the water column may have changed due to the effects of global warming or ocean acidification. Analysing the samples collected by the ROV means the team will better understand the deep-sea history recorded by these organisms and their future capacity to cope with the pressures of climate change.

Besides giving researchers the chance to learn more about the Perth Canyon, the work will also help to better understand the likely threats to other deep ecosystems in the region and similar environments worldwide. The expedition also leads the way to show how the use of modern technology can unlock the secrets of the deep-sea habitats that lie at our door-step.

Another exciting find was the previously ‘lost’ autonomous ocean glider that went missing on an assignment as part of the Integrated Marine Observing System near the Perth Canyon over two years ago. Scientists discovered the bright-yellow vehicle on the Canyon floor at a depth of over 700 metres. Professor of Coastal Oceanography, Chari Pattiaratchi said the discovery of the seaglider was an unexpected discovery and a cause for celebration aboard the ship. 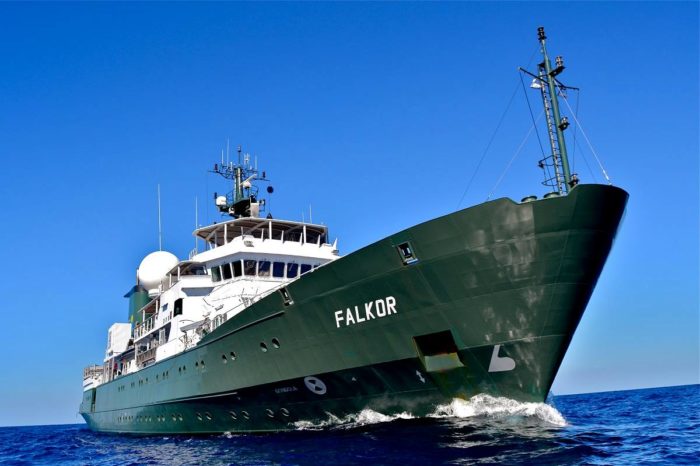