High temperatures, not ocean acidification is threatening the growth of coral

The Achilles’ heel of coral growth is high temperatures, not ocean acidification, according to researchers from The University of Western Australia and the ARC Centre of Excellence for Coral Reef Studies. The research will be presented tomorrow in Canberra at the Coral Reef Futures Symposium.

Lead researcher Professor Malcolm McCulloch from the ARC Centre of Excellence for Coral Reef Studies (Coral CoE) and The University of Western Australia (UWA) found that under ocean acidification, coral can still build skeletons, or calcify. However, they lose this ability when they bleach under the extreme heat events that now characterise global warming.

Professor McCulloch said coral calcification, a process vital for building reefs, was dependent on a partnership between coral and their photosynthetic algae (zooxanthellae).

“Coral fine-tune their internal pH to maximise the supply of carbon and energy from their zooxanthellae. This can then lead to calcification, or skeleton-building,” Professor McCulloch said.

“However when there are abrupt increases in seawater temperatures this relationship breaks down – the coral becomes stressed and expels its zooxanthellae. This leaves it with little energy to survive. Unless the temperature drops and the zooxanthellae are able to recolonise in the coral, the coral may die.”

Stony coral builds the iconic tropical coral reef networks that dominate many shallow-water environments, harbouring more than one-third of the oceans’ biodiversity. Professor McCulloch examined massive Porite coral collected from the Great Barrier Reef (GBR) and from Coral Bay Ningaloo Reef. A coral core collected from the GBR was used to look directly at the impact of the global bleaching event of 1998 — which is still the warmest summer on record for the central section of the GBR.

One of Professor McCulloch’s studies concludes that the increasing frequency and intensity of coral bleaching events due to CO2-driven global warming is the greatest immediate threat to the growth of shallow-water reef-building corals, rather than the closely associated process of ocean acidification.

Professor McCulloch will present tomorrow at 11am in the Global Change session of the Coral Reef Futures Symposium at the Shine Dome in Canberra. Media are welcome to attend this session.

Links to the research papers are as follows: 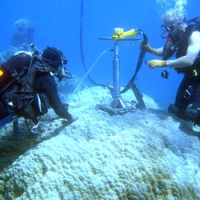