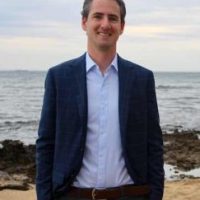 Andrew’s research investigated through a laboratory and an extensive field experiment how hydrodynamic processes affect the temporal and spatial variability in size, concentration and transport of sediment in a fringing coral reef. His research demonstrated that at a small (within canopy) scale, suspended sediment is unrelated to shear stresses derived from the logarithmic mean current profile or turbulence measured above the roughness, but is instead correlated to the bed stresses within the roughness canopy layer. At large reef-wide scales, sea-swell waves, infragravity waves and currents may all contribute to sediment transport on a reef flat, while in a lagoon, the sea-swell waves and currents are important.

Andrew initially worked as a coastal and maritime engineer where he was involved in the analysis of coastal processes in Victoria, Western Australia and S.E. Asia. He was also involved in the design of engineering solutions for coastal infrastructure for Government departments at local, state and national levels as well as for private clients. He has been involved in a number of specialised projects including the design of regional tsunami warning system infrastructure. Andrew has a Bachelor of Engineering (Civil) with honours from The University of Melbourne as well as a Master of Engineering (Coastal and Marine Engineering and Management) that was jointly awarded by Delft University of Technology (The Netherlands), The Norwegian University of Science and Technology (Norway) and Universitat Politecnica de Catalunya (Spain).

Andrew is a Research Associate at The UWA Oceans Institute based in the Indian Ocean Marine Research Centre at The University of Western Australia. His research considers how physical processes (i.e., waves and currents) affect a range of benthic ecosystems. He is also involved in quantifying wave energy resources in the Indian Ocean region. He lectures in Coastal and Physical Oceanography as well as Geomorphology. He also coordinates and delivers courses in conjunction with other universities in Indian Ocean region.

In 2017, he was awarded a Fulbright Post-doctoral scholarship to undertake research with The US Geological Survey in sediment transport processes within a range of reef environments.