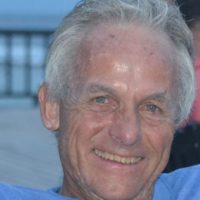 Dr Graham Symonds is a physical oceanographer with interests in near shore processes on beaches and reefs, and inner continental shelf processes. Graham received his PhD from Dalhousie University, Canada, in 1982 and has worked as a research scientist with the Canadian Department of Fisheries and Oceans at the Bedford Institute of Oceanography, Lecturer/Senior Lecturer at the University of New South Wales at the Australian Defence Force Academy in Canberra, and a Senior Research Scientist at CSIRO, Oceans and Atmosphere in Perth, Western Australia. Graham has been an Honorary Research Fellow at the University of Western Australia since October 2015. His major research interests are waves, currents and sediment transport on beaches, reefs and inner continental shelf. Current research includes CFD modelling of sediment driven gravity currents.